Every now and then the French Grand Prix, oldest of all the classic Grandes Epreuves, shifts from its now almost traditional home at Rheims to the much smaller (1.97 miles), prettier, wooded circuit of Les Essarts, near Rouen in north-west France: part of the circuit is on RN.840 about 80 miles from Paris.

Rheims is very fast with long straights and few corners, a circuit where the fastest car, rather than the fastest driver, will win. Rouen is just the opposite: short straights, many corners - a real driver's circuit, in fact. The last two Grands Prix held at Rouen, in 1962 and 1964 were both won by the American Dan Gurney driving a Porsche and a Brabham respectively.

A faithful recreation of the original Rouen feature page in various sizes, free to download. 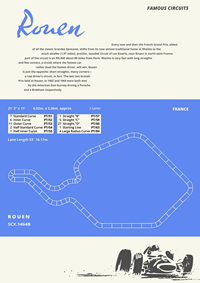