The unique Monaco circuit is among the most famous in the world. It is one of the shortest (1.98 miles) and slowest (lap record 76.7 m.p.h.) yet provides some of the most exciting racing seen in the Grand Prix calendar. It snakes through the narrow hilly streets of Monte-Carlo, perched on the shores of the Mediterranean in the South of France, and is one of the only round-the-house circuits left in Europe.

Gasometer corner, the station hairpin and curving tunnel are scenes of famous battles in motor racing history. The spectacular harbour, bobbing with boats beneath Prince Rainier's towering yacht, has claimed, among others, the great Alberto Ascari whose car plunged from the road in a column of spray; boat crews fished him out unharmed. Graham Hill won the race in 1965 for B.R.M. and became the first man ever to win at Monaco three times in succession.

A faithful recreation of the original Monte Carlo feature page in various sizes, free to download. 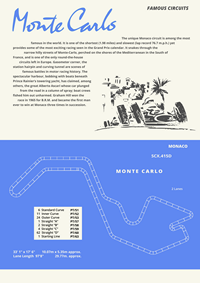